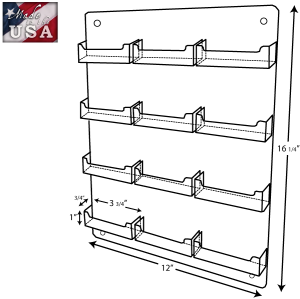 This 12 pocket business card holder is assembled as one piece, producing exceptional structural integrity, this display is built to last.    This is the most economical business card Business cards can be traced back to the 17th century and the nobility of Europe. At the time they called visiting cards and were presented to the servant of a household when nobility came calling. Later they were called trade cards in 17th century London when tradespeople used them to describe the businesses and locations. In the 18th century, calling cards were used to announce the arrival of a man calling on a lady. By the late 18th centuries, the ideas of the trade cards and calling cards were combined into what is now known as business cards.

You have not viewed any product yet!